The Ketogenic Diet For Treatment of Epilepsy

Few specialty diets have the supporting body of scientific evidence and clinical trials than the Ketogenic Diet, or Keto Diet. The keto diet was originally developed in the 1920s as a result from observations that fasting had antiseizure properties. 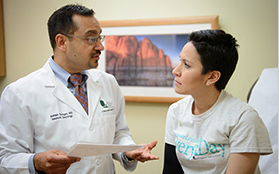 When the body is forced to fast, fat stores are metabolized producing fatty acids which undergo beta-oxidation into ketone bodies (acetoacetate, β-hydroxybutyrate, and acetone). The cell can use ketones, instead of glucose, as precursors to generate adenosine triphosphate (ATP) which powers the cell.

The ketogenic diet, which restricts carbohydrates and increases fat intake, is thought to simulate starvation and thereby force the body to burn fat as a fuel source instead of glucose. Though the diet was very successful in controlling certain epileptic seizures in children. It fell out of favor in the late 1930s as new anticonvulsant drugs were developed. However, the diet experienced a resurgence in the 1990’s as a result of a few high profile cases involving children with refractory epilepsy that were not responsive to the anticonvulsant drugs.

Although there is a considerable body of research and clinical trials, the mechanism through which ketone bodies help to reduce seizures in epilepsy patients is not clearly understood. Since the ketogenic diet is less effective for controlling seizures in adults, the majority of research focused on children.

The ketogenic diet can have adverse effects though they are generally less severe than anticonvulsant medications. Most effects are easily treatable or reversed such as constipation, hypoglycemia, and low-grade acidosis. The effects in children who remain on the diet for a period of years can be more serious. The diet may lead to increased risk of kidney stones, stunted growth, or adverse bone health.

The renewed use of ketogenic diets as a medical therapy has increased interest in its potential use for other conditions. The table below lists some of the disorders being studied.

In a recent paper published by Dr. Kristin Baranano in The National Institutes of Health Center for Biotechnoloy Information, she stated;

The ketogenic diet has many potential effects and is likely to have different mechanisms in different diseases [8]. In metabolic conditions, cancer, trauma, and ischemia, the ketogenic diet may confer a protective effect by providing an additional energy substrate to tissue at risk of cell death. However, ketosis may have more complicated effects. In one model, rats fed the ketogenic diet show marked upregulation of both the ketone transporter and the glucose transporter type 1 (GLUT-1), promoting the influx of nutrients into the brain [9]. These authors provided evidence that the ketogenic diet increases capillary density without increasing overall blood flow, providing a way that the diet may help nourish tissue at risk. This finding is particularly interesting in light of findings in animals with tumors, in which the diet is associated with an anti-angiogenic effect [10,11]. These discordant results eventually will need to be reconciled; they may be due to differences in angiogenic stimuli in normal cells versus malignant cells.

It is possible to discuss two aspects of the diet: known or “direct” properties (high ketone-body levels, high fat, and restriction of calories from carbohydrate) and potential indirect effects (eg, effects on neurotransmitters, ion channels, or mitochondrial biogenesis) (Table 2). Ketone bodies provide alternative substrates for use in the tricarboxylic acid cycle and enhance mitochondrial function (evidenced by increased ATP production and decreased effects of reactive oxygen species). Fatty acids and calorie restriction may have beneficial effects by themselves. The potential indirect effects have been studied in epilepsy but have not been investigated to the same degree in other illnesses. Formal studies of the efficacy of the ketogenic diet in epilepsy should serve as a model for future clinical investigations in other disease.

The publication can be read in it’s entirety at https://www.ncbi.nlm.nih.gov/pmc/articles/PMC2898565/

A very thorough review of the history of Ketogenic Diets and it’s use in treating epilepsy can be found on Wikipedia at https://en.wikipedia.org/wiki/Ketogenic_diet